The Supreme Court showed on Monday that it is willing to consider holding people responsible for going online to “shoot off their mouths,” as one lawyer put it, but the Justices seemed well short of knowing just how to do that.  An hour-long argument over crime via social media probed, with not much success, for a legal standard of proof to judge when a rant goes from being offensive to being threatening.

That the argument in Elonis v. United States would be difficult for everyone, Justices and lawyers alike, became clear just seconds after the hearing opened.  Justice Anthony M. Kennedy lamented that the one method that is supposed to show when a rant is a crime — that is, when it is a “true threat”– was a “most unhelpful phrase.”  But the Court’s search for an alternative seemed elusive, indeed. 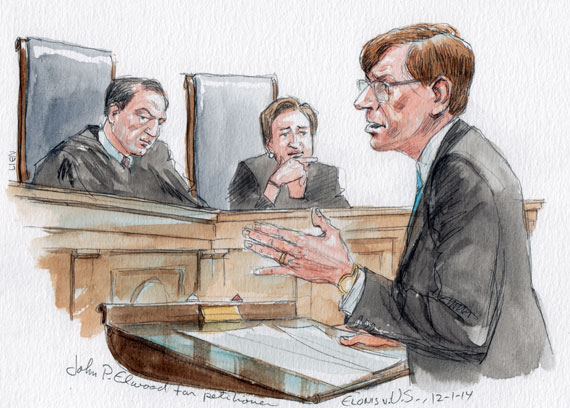 The federal government wants the Court to rule that, if a “reasonable person” would interpret an Internet rant as a threat, that should be enough to get a criminal conviction.  But the lawyer for a Pennsylvania man convicted of making threats on Facebook wants the Court to declare that his client had to intend specifically that his words would be taken as a threat, and he knew it.

The gaping distance between those two positions led the Court to explore intermediate possibilities — whether “purpose” should count, ” whether “knowledge” was enough, whether mere “recklessness” would suffice.  If that were not challenging enough, the Court struggled to figure out, if they opted for a “reasonable person” to test the meaning of menacing words, exactly who that would be.  Would it be necessary to use a teenager addicted to the Internet to judge a teenager who sent a message with threats included?  Who would judge whether a rant was only a rap, as in rap music with violent lyrics?

To decide the case, the Court does have to settle on a definition of proof, because the language of the federal law at issue seems — if applied literally — to say that any threat of harming someone else is criminal, but the Court has insisted that the law only applies to “true threats.”  How to know, then, when a threat reaches the level of being true or real?

John P. Elwood, a Washington, D.C., lawyer arguing for a “specific intent” requirement, had to deal with such a flurry of often-contradictory  questions from the bench that he barely could make a consistent argument, and was told more than once that he was not arguing what he should have been, or what one Justice or another expected him to argue.

Deputy Solicitor General Michael R. Dreeben, the federal government’s premier courtroom advocate on criminal law, at times seemed to have the Court leaning his way because of the emphasis he was putting on the targets of online rants, but at other times seemed to be pushing his argument well beyond what even a First Amendment-sympathetic Court would find comfortable. 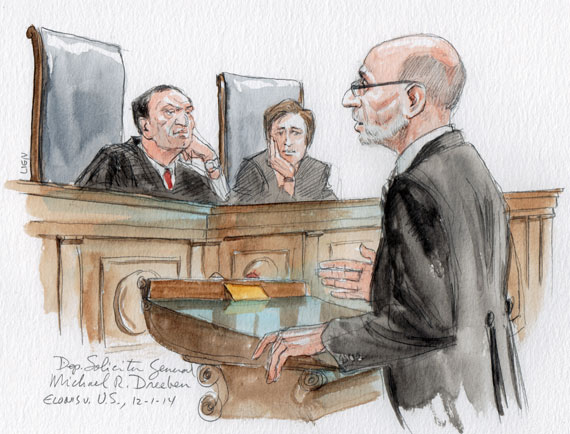 Justice Elena Kagan, for example, told Dreeben that the Court would normally want to set up a kind of “buffer zone” between the First Amendment and criminal prosecution but, she noted, the government was having none of that.   Dreeben did not back off; what this case was dealing with, he said, were “criminal threats that did not have First Amendment value.”

Justice Stephen G. Breyer, who may be the Court’s most knowledgeable on the intricacies of criminal law, suggested — somewhat unhelpfully — that the First Amendment be put aside so that the focus could be on “the ordinary criminal code” and the proof necessary for guilt.  But the whole reason that the Court has narrowed the threat-by-communications law to apply only to “true threats” is because of concerns over how much innocent speech might wind up getting prosecuted.

Although the Justices did not spend a lot of time analyzing whether the Internet was different from other forums of communications, now and then a Justice would throw in a presumably knowing reference to Eminem or to rappers more generally.  Dreeben dismissed the supposed “chilling effect” on rappers by saying they simply would not be prosecuted for using violent lyrics, because that was supposed to be “entertainment.”

Justice Antonin Scalia was the only Justice who appeared not to be perplexed by the argument.  Waving off much history about the First Amendment’s protection of offensive speech, he suggested that “a lot of language” used in the Facebook postings in this case “was not worth a lot, anyway.”

Justice Samuel A. Alito, Jr., gave the argument a provocative finish, telling Elwood that he had laid out “a roadmap for putting a spouse in fear” by defending his client’s Facebook rants about his ex-wife, and suggesting — as amicus briefs had — that protecting this kind of Internet speech posed “a very grave threat of domestic violence.”