UPDATE 9:22 p.m.   Over the dissents of two Justices, the Supreme Court on Monday evening temporarily barred enforcement of the birth-control mandate against Wheaton College, a non-profit religious institution in Illinois.  The college faced a midnight deadline to comply with the mandate or face heavy financial penalties.  The Court’s order will remain in place at least through Wednesday afternoon.  The federal government is to file a response by 10 a.m. Wednesday, with the college’s reply due at 5 p.m. that day.   Justices Stephen G. Breyer and Sonia Sotomayor would have denied that postponement; neither they nor the Court gave reasons.

UPDATE 2:14 p.m.   Acting swiftly in the wake of the Court’s ruling on Monday, and relying directly upon that decision, the U.S. Court of Appeals for the Eleventh Circuit on Monday blocked all enforcement of the mandate against an Alabama Catholic TV network, a non-profit entity.   The concurring opinion of the court of appeals, written by Circuit Judge William H. Pryor, Jr., argued that the accommodation, discussed in the following post, is itself likely to be struck down.

Female employees of companies whose owners’ religious beliefs forbid them to provide access to birth control may look forward to that coverage by other means — but, again, maybe not.  The answer depends upon how literally the Supreme Court, in future cases, reads the language it used on Monday to assure those workers that they will get that coverage, after all, under the new federal health care law.

Read as actually contained in two opinions in Burwell v. Hobby Lobby Stores, that language seems to decide an issue that actually was not before the Court — but soon will be.  Here is that question:  does the accommodation of business owners’ religious views need an added accommodation to make it acceptable to them, and to make the birth control mandate legal? 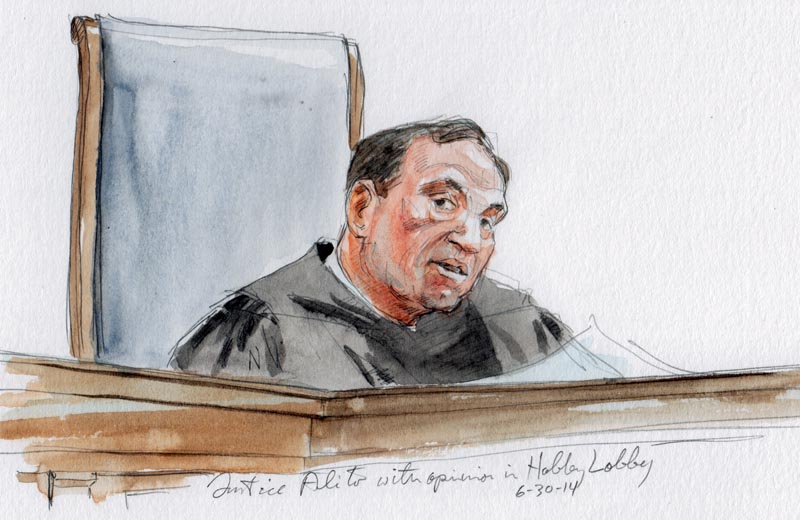 Understanding the scope of the Court’s ruling depends upon both the lead opinion by Justice Samuel A. Alito, Jr., which has the full support of four other Justices and that makes it binding, and upon the separate opinion of Justice Anthony M. Kennedy, who, while one of the five in the majority, wrote separately in an attempt to show how narrow the Court’s decision was.

First, a bit of background.

As the federal government interprets the Affordable Care Act, it includes mandatory coverage in employee health plans of sixteen different forms of medical care related to child-bearing, or its prevention.  In Monday’s decision, profit-making businesses that are owned only by a family or other closely allied individuals (or by a family trust) have a legal right under the Religious Freedom Restoration Act not to be forced to include four specific forms of birth control in their workers’ plan.

But, as both Justice Alito and Justice Kennedy pointed out, the government has fashioned an alternative way to assure such coverage.   Rather than making the owners pay for the coverage to which they object for religious reasons, the employee benefit plan itself — that is, the insurance company or the internal plan administrator — has to take on the obligation, and provide the coverage to the female workers, free of charge.

Either this “middle man” has to absorb the cost itself (the owners can’t be required to put up the money), or it will get a government subsidy to help cover the cost.

Is that enough of an accommodation of the owners’ religious objection?   The two key opinions on Monday seemed, literally speaking, to say it was.

Justice Alito wrote:  “An approach of this type . . . does not impinge on the [companies’ or owners’] belief that providing insurance coverage for the contraceptives at issue here violates their religion, and it serves [the government’s] stated interests equally well.”  (The government’s interest here is to assure that women have access to the birth-control services.)

Alito’s opinion for the Court went on, saying that the dissenters’ on Monday had identified “no reason why this accommodation would fail to protect the asserted needs of women as effectively as the contraceptive mandate, and there is none.”

Justice Kennedy, in his separate concurring opinion, made the same point.  And, in fact, he was more emphatic.  Taking note of the “existing accommodation the government has designed, identified, and used for circumstances closely parallel to those presented here,” Kennedy said flatly that “RFRA [the Religious Freedom Restoration Act] requires the government to use this less restrictive means.”

It is rather difficult to read those comments by those two Justices as anything other than a declaration that religiously oriented owners of closely held companies must be satisfied with letting the “middle man” take on, in their place, the obligation to provide the birth-control coverage.   That, the comments seem to say, is good enough.

But that may not be the end of the matter.   An issue that was not directly before the Court (although the Alito opinion made a couple of passing mentions of it) is directly tied up with how the accommodation the two Justices discussed actually will work.

To take advantage of the exemption, a closely held company owned by religiously devout individuals must file a form, specified by the government, in order to trigger the legal duty of the “middle man” to provide the coverage as a stand-in for the company or its owners.

Federal government lawyers have made it clear in court, over and over again, that the “middle man” will not have any authority to step in unless the company or its owners file that government form claiming an exemption for the mandate.

Some whose religions tell them to have nothing to do with some forms of birth control (often on the premise that they amount to a form of abortion) believe that even the filing of that formal declaration is itself an act of participation in the provision of those very services for people on their payroll.  The form sets in motion, this argument goes, the entire process that results in birth control being made available to the workers for free.

The Court has seen that argument before, even though it was not directly at issue on Monday.  It was made to the Court late last year by a Colorado Catholic charity, the Little Sisters of the Poor.  To spare that organization from filing a form to which it had specific religious objections, the Court in January said that the Little Sisters could simply file a letter with the government, saying that it was a religious group and that it had religious objections to the coverage.

That issue is now in the process of returning to the Court in pleas by non-profit religious entities, rather than for-profit businesses, seeking what might be called the accommodation to the accommodation.  But adopting the Little Sisters of the Poor approach raises its own potential difficulty:  how is the coverage triggered if the organization does not have to file the required form?

To reiterate:  under existing government regulations, it appears, there is no legal basis for the “middle man” to begin providing coverage without the required form having been filed with it.  At a minimum, the government may have to write new regulations — or ask for help from Congress — to assure that female workers employed by such organizations will get the coverage.

It seems highly unlikely that the organizations seeking this accommodation to the accommodation will be satisfied to accept what the Court said literally on Monday, and giving up further legal challenges because of that.   Since that was not directly at issue, they would have a quite strong argument that, whatever the Court did say on the point, it actually remains unresolved.