Quoting from the Bible — not the usual source of legal wisdom — the Supreme Court on Tuesday upheld a government rule that will parcel out the duty to stop or at least reduce dirty air from blowing from one state into another.  The decision split the Court, mainly along the lines of whether big government is getting out of control.

It took nearly a half-hour for the authors of the majority and dissenting opinions to orally proclaim in the courtroom their differences, in the six-to-two ruling in Environmental Protection Agency v. EME Homer City Generation.  It was a clear victory for EPA, with the only blemish on its name the complaint of the dissenters that the result was a “textbook example of . . . government by the bureaucracy” instead of “by the people.”  The EPA, already beleaguered by critics of its actions, may well draw new protests and attempts in Congress to curb its authority. 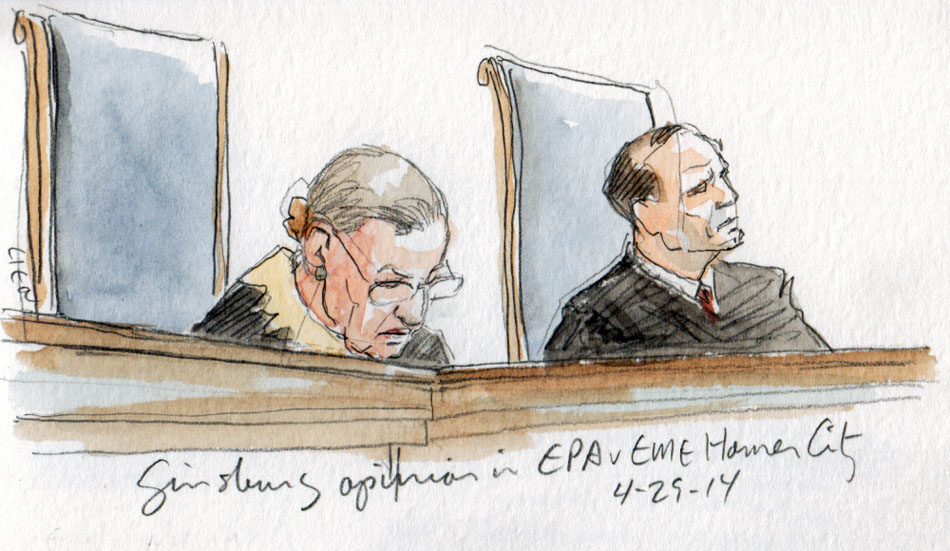 Justice Ginsburg announces the opinion of the Court. (Art Lien)

Justice Ruth Bader Ginsburg, writing for the majority, described the basic weather-pattern problem that EPA sought to solve in this dispute.  She did so by quoting the King James Version of the Bible:  “The wind bloweth where it listeth, and thou hearest the sound thereof, but canst not tell whence it cometh, and whither it goeth.”

In her own words, Ginsburg said this was the problem:  “In crafting a solution to the problem of interstate air pollution, regulators [the EPA] must account for the vagaries of the wind.”  Pollution, it appears, rises from various industrial sources, like power plants and factories, and wafts with the wind currents from place to place, sometimes over hundreds of miles, and even changes its chemical nature, creating hazards to health in its ultimate destinations — mainly, but not entirely, in downwind states.

At issue in the case was how the Court would interpret a so-called “good neighbor policy,” mandated by Congress in 1977.  Aware that “upwind states” were sending foul air to “downwind states,” the policy ordered states to develop plans to keep polluters within their borders from sending into other state winds that would keep those neighbors from satisfying federal clean-air requirements.

Finding that the approach adopted in 1977 did not deal adequately with the problem because it was too limited in scope, Congress in 1990 told the states to prohibit any source inside their borders from adding “significantly” to neighbors’ ability to maintain clean air.

EPA has tried various regulatory rules to carry out that mandate.  The latest approach, the one upheld by the Court on Tuesday, is a complex rule adopted in 2011 that took into account nearly 2500 wind flow patterns between upwind and downwind states.  In view of that complexity, EPA opted not to calculate each upwind state’s share of the blame for transporting pollution to a neighboring state.

Instead, it selected the states whose pollution migration had more than a minuscule impact on neighbors, with the scope of its pollution-reducing duty defined mainly by the cost of doing so.  These cost formulas did not have the direct effect of assigning to each state its actual proportion of the reduction in air quality downwind.  EPA figured it couldn’t allocate the blame that precisely.  Its cost-based formulas were the option it chose.

That approach, however, was struck down by the U.S. Court of Appeals for the District of Columbia Circuit, which ruled that EPA was supposed to apportion the blame state by state on the basis of their share of downwind impairment of air quality.   The court of appeals also ruled that EPA should not have stepped in to craft a pollution-control plan of its own for the upwind states, but rather should have held off until those states were given a chance to adopt control methods on their own.

In Tuesday’s ruling, the Court overturned the D.C. Circuit on both points.  It declared that the courts were obliged to defer to EPA’s expertise on how to fashion an explicit “good neighbor policy” that dealt with “the vagaries of the wind.”

The Court also ruled that EPA had no duty to give the affected states a new opportunity to fashion their own pollution-control strategies to protect their neighbors, before EPA stepped in to develop its own approach.

Justice Ginsburg’s opinion was joined by Chief Justice John G. Roberts, Jr., and Justices Stephen G. Breyer, Elena Kagan, Anthony M. Kennedy, and Sonia Sotomayor.  Justice Samuel A. Alito, Jr., took no part in the ruling; no reason was given for his recusal.

Justice Antonin Scalia, in a dissent for himself and Justice Clarence Thomas, argued that the ruling implicated “the major problem that many citizens have with the federal government these days: that they are governed not so much by their elected representatives as by an unelected bureaucracy operating under vague statutory standards.” 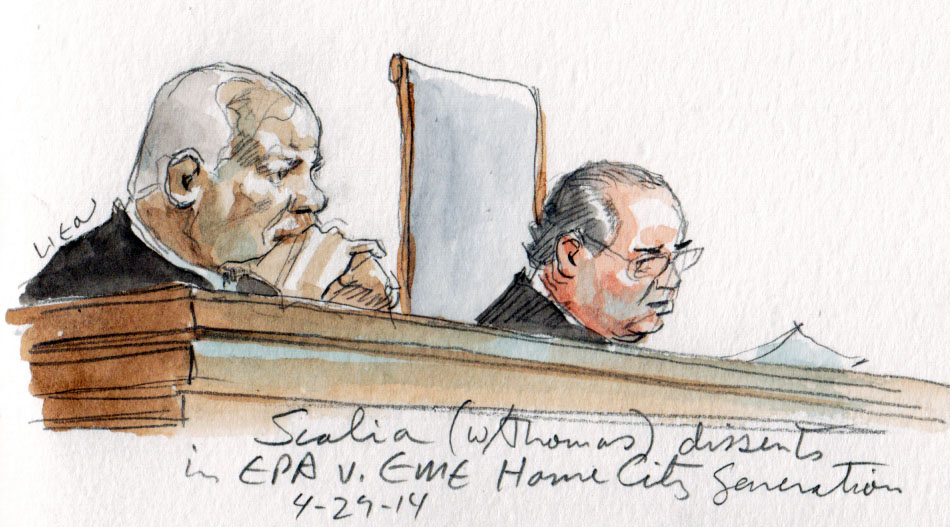 Justice Scalia announces his dissent, joined by Thomas, from the bench. (Art Lien)

Congress, the dissenters said, “did it right” by ordering each state to shoulder its own share of sending polluted air downwind.  Instead, the dissenting opinion said, EPA opted to develop a plan “to make each state eliminate those contributions to downwind pollution that are inexpensive to eliminate.”