Diane Marie Amann is the Emily and Ernest Woodruff Chair in International Law at the University of Georgia School of Law.

The Supreme Court yesterday decided its first arbitration case involving a sovereign nation-state much as it would any other international commercial arbitration matter.  Overturning an appellate ruling that a private investor’s failure to fulfill a treaty requirement had deprived arbitrators of jurisdiction, the Court’s seven-member majority effectively reinstated a multimillion-dollar arbitral award against the sovereign state, the Republic of Argentina.  The judgment rebuffed a treaty interpretation proffered by the United States, which had briefed and argued the case as an amicus.  Yet the Court left open the question of how it would interpret certain investment treaties to which the United States is party. 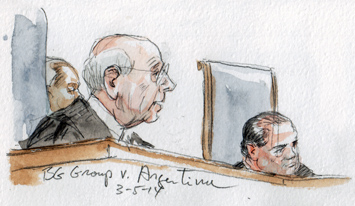 The dispute in BG Group plc v. Republic of Argentina concerned the investment of petitioner BG Group, a British firm, in a privatized natural gas utility operating in Buenos Aires.  At the time of the early 1990s investment, Argentine law linked gas tariffs to the U.S. dollar.  But Argentina broke the linkage when its economy collapsed less than a decade later.  That and other emergency measures resulted in losses for BG Group, which in 2003 sought arbitration pursuant to a 1990 bilateral investment treaty between the United Kingdom and Argentina – one of the thousands of BITs that countries have concluded in the last quarter-century.  Following an arbitration in Washington, D.C., arbitrators concluded in 2007 that Argentina had not accorded BG Group “fair and equitable treatment” as required by Article 2(2) of the treaty, and thus ordered Argentina to pay $185 million in damages.  The matter then moved to federal court.

In 2011, the U.S. District Court for the District of Columbia confirmed the arbitral award.  A year later the D.C. Circuit reversed.  Its decision turned on Article 8(2)(a) of the Britain-Argentina treaty, which provides that a dispute shall be submitted to arbitration upon one party’s request “where, after a period of eighteen months has elapsed from the moment when the dispute was submitted to the competent tribunal . . . , the said tribunal has not given its final decision.”  The arbitrators had ruled that it would have been “absurd and unreasonable” to enforce this local litigation requirement in the face of emergency restrictions imposed by Argentina, and the district court deferred to this determination.  But the D.C. Circuit reviewed the issue de novo, held that BG Group’s failure to satisfy the requirement had stripped the arbitrators of jurisdiction, and vacated the arbitral award.

Whether deferential or de novo review was appropriate amounted to a question of “who – court or arbitrator – bears primary responsibility for interpreting” the treaty provision, according to the opinion for the Court by Justice Stephen G. Breyer.  In search of an answer, the Court followed a two-step approach, “initially treat[ing] the document before us as if it were an ordinary contract between private parties,” and then examining “whether the fact that the document in question is a treaty makes a critical difference.” Citing precedents including Breyer’s own opinion for the Court in Howsam v. Dean Witter Reynolds, Inc., the Court held that in disputes involving “ordinary contracts,” courts decide substantive issues of “arbitrability,” while “procedural matters” are presumptively left to arbitrators.  The local litigation clause in Article 8 constitutes “a purely procedural requirement – a claims-processing rule that governs when arbitration may begin,” the Court wrote in BG Group.  It found in the text of the Britain-Argentina treaty no evidence that drafters intended to displace this “ordinary contract assumption.”

The Court then acknowledged that what was at issue was not a private contract, but a treaty, and it expressed “respect” for “the Government’s views about the proper interpretation of treaties.” Yet the Court rejected the United States’s view that the local litigation clause was “‘a condition on the State’s consent’” meriting de novo scrutiny. Instead, the Court applied “‘a [h]ighly [d]eferential’” standard of review, and accepted the arbitrators’ determination that they had jurisdiction to resolve the dispute. The Britain-Argentina treaty, it reasoned, contained no “explicit language” or other evidence of an intent to set aside the “ordinary interpretive framework.”

The dissenters found little that was ordinary in this case of first impression. Of foremost concern was the fact that the document at issue was “a treaty between two sovereign nations” to which “[n]o investor is a party,” wrote Chief Justice John G. Roberts, Jr., in a dissent joined by Justice Anthony M. Kennedy.  By focusing first on private contracts, the majority “start[s] down the wrong road” and “ends up at the wrong place,” the dissent added.  In the dissenters’ view, Article 8(2)(a) is a substantive rather than a procedural requirement:  it “constitutes only a unilateral standing offer by Argentina with respect to U.K. investors” – an offer that must be accepted via submission of the dispute to a local court before Argentina may be held to have consented to arbitration.  Arguing for a remand to determine if actions by Argentina excused BG Group’s failure to exhaust the local adjudicative remedy, dissenters emphasized the investor-state aspect of the dispute:  “It is no trifling matter for a sovereign nation to subject itself to suit by private parties; we do not presume that any country – including our own – takes that step lightly.”

Quoting this passage was Justice Sonia Sotomayor, in a concurrence in part that charted a path between the majority and dissenting opinions. Sotomayor agreed with the dissenters that the prerequisite of parties’ consent to arbitration “is especially salient in the context of a bilateral investment treaty” that amounts to “a nation state’s standing offer to arbitrate with an amorphous class of private investors.”  Unlike the dissent, however, Sotomayor found insufficient evidence that drafters intended such an offer.  She thus distinguished Article 8 of the Britain-Argentina pact from the explicit “Conditions and limitations on Consent of Each Party” contained in Article 11.18 of the U.S.-Korea Free Trade Agreement.  Sotomayor explained that she joined the opinion for the Court with the understanding that the majority “wisely ‘leave[s] for another day the question of interpreting treaties that refer to “conditions of consent” explicitly.’”

The Court’s decision in BG Group thus may prove simply to impose a clear statement rule – a rule that no less than a private party, a nation-state which wants to assure that courts rather than arbitrators have the last word on whether it consented to arbitration must say so explicitly. As an amicus, the United States argued that such intent might be implicit in the bilateral investment treaty at issue.  Although the majority disagreed, as Sotomayor’s concurrence indicated, its holding may not extend to U.S. treaties that, unlike the Britain-Argentina treaty, contain explicit conditions.  These include not only the U.S.-Korea agreement, but also the North American Free Trade Agreement, to which the United States belongs along with Mexico and Canada, and the U.S. Model Bilateral Investment Treaty. Whether in some future case the Supreme Court will enforce such express provisions remains an open question.

The Court’s decision in BG Group plc v. Republic of Argentina turned on a clause in an investment treaty between the United Kingdom and Argentina that required a private investor (here, a British company that had invested in Argentina) that wished to arbitrate its dispute with the host country first to submit the dispute to the country’s local court system and then wait for eighteen months.  A divided Supreme Court held that arbitrators, and not courts, are primarily responsible for deciding what to do if the private investor fails to satisfy this requirement. The Supreme Court thus reversed a decision in which the U.S. Court of Appeals for the District of Columbia Circuit overturned an arbitral award excusing such a failure by BG Group. The Court held that the local litigation requirement was a procedural, rather than substantive matter; therefore, courts should defer to the arbitrators’ determination.  Two Justices dissented. A third Justice concurred in part on the understanding that the Court’s opinion left for another day the question of how to interpret a clause that – unlike the one the Court was reviewing – explicitly conditioned the country’s consent to arbitration on fulfillment of the requirement.

[Disclosure: Goldstein & Russell, P.C., whose attorneys contribute to this blog in various capacities, served as counsel to the petitioner in this case. The author of this post is not affiliated with that law firm.]