Almost two years ago to the day, the Supreme Court heard oral arguments in a challenge to the Affordable Care Act’s individual mandate, which requires virtually everyone in the United States to buy health insurance or pay a penalty.  This morning, it heard a new and different challenge arising out of the Affordable Care Act:  can a business be required to provide its female employees with health insurance that includes access to free birth control, even if doing so would violate the strong religious beliefs of the family that owns the business?  After the oral argument today, it looked like the Court’s answer may well be no, although the decision may not prove as sweeping as some of the challengers might prefer.  And as is so often the case, it looks like Justice Anthony Kennedy may hold the key vote in the case.  Let’s talk about the proceedings at the Court today in Plain English. 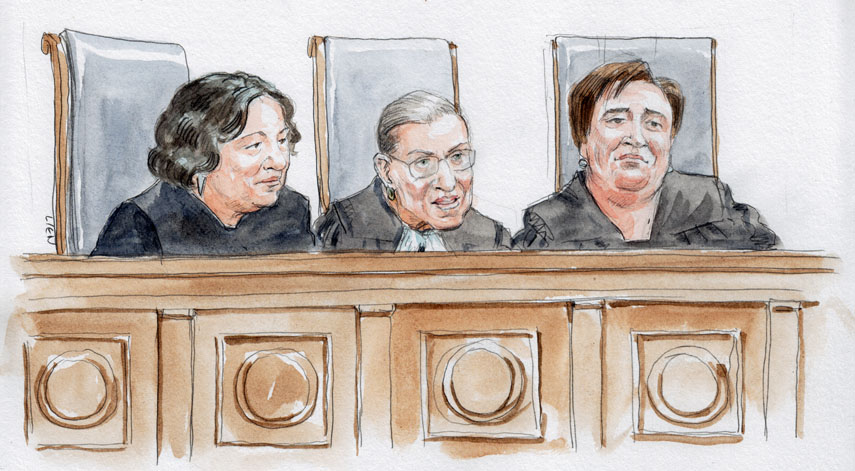 As Lyle explained in his preview of today’s oral arguments, the two cases at the Court today (which were treated as one ninety-minute argument) were filed by two deeply religious families and their family businesses:  the Green family owns the craft chain Hobby Lobby and the Christian bookstore chain Mardel; the Hahn family owns the cabinet company Conestoga Wood Specialties.  Regulations issued under the Affordable Care Act require the companies to provide their female employees with health insurance that includes no-cost access to twenty forms of birth control.  The families, however, object on religious grounds to providing four of those forms – two brands of the emergency “morning after” pill and two kinds of interuterine devices (IUDs) – that prevent embryos from implanting in a woman’s uterus.  Because they believe that human life begins at conception, the families therefore believe that if the corporations were to cover those four forms of birth control, they would in essence be “complicit in abortion.”

The families and the companies went to court, arguing that the “birth control” mandate violated the Religious Freedom Restoration Act (RFRA), a 1993 law that Congress enacted as a response to a 1990 Supreme Court decision holding that an individual’s religious beliefs do not excuse him from having to follow a law that applies to everyone – in that case, a state law prohibiting the use of the hallucinogenic drug peyote.  (The Court also agreed to review whether the mandate violated the Hahn family and Conestoga’s religious rights under the First Amendment, but there was very little discussion of that question today.)  Under RFRA, the government cannot impose a “substantial burden” on the exercise of religion unless that burden uses the narrowest possible way to promote a very important interest of the government.

Former Solicitor General Paul Clement argued first today, on behalf of the challengers to the mandate (collectively referred to as “Hobby Lobby”), and the initial battle lines were quickly drawn.  Three of the Court’s more liberal Justices focused on the potential scope of the rule that Clement and his clients were advocating.  If Hobby Lobby prevailed, Justice Sonia Sotomayor asked, could employers refuse to cover other medical procedures, like blood transfusions?  Or, Justice Elena Kagan added, what about vaccinations?  Clement responded that any procedure to which an employer objected on religious grounds could be reviewed under the RFRA “substantial burden” test.  Hobby Lobby’s case, he argued, was an easy one, he argued:  the fact that the government has excused other employers – such as churches, small businesses, and religious non-profit groups – from having to comply with the mandate demonstrates that the government’s interest in having Hobby Lobby comply with the mandate is not very significant.  By contrast, he noted, an employer who objected to providing coverage for vaccinations, he noted, might have a tougher time meeting the RFRA test because of the very strong government interest in having as many people as possible vaccinated to prevent the spread of disease.  That answer did not seem to satisfy Kagan, who lamented that, if every medical treatment to which someone objects must be evaluated on a case-by-case basis,” everything would be piecemeal, nothing would be uniform.” 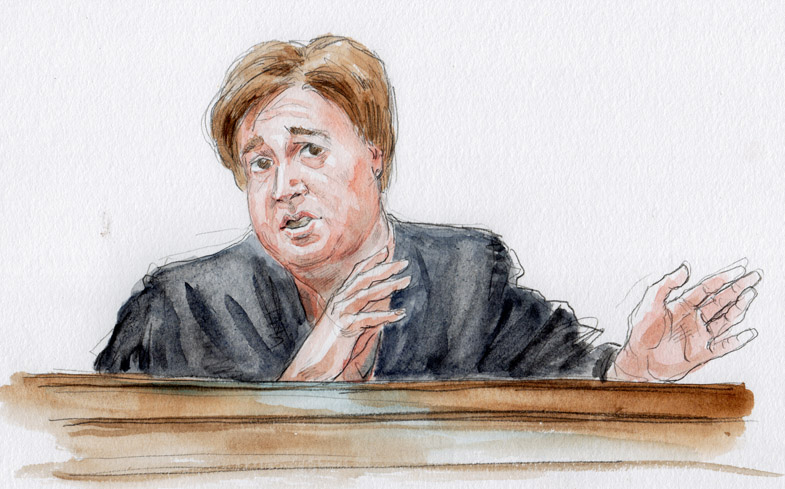 Kagan then turned to the prospect that a decision in Hobby Lobby’s favor would have sweeping effects on RFRA even more broadly, raising a point to which both Justice Ruth Bader Ginsburg and she would return to several times.  RFRA, Kagan suggested, was an uncontroversial law when Congress – by an almost unanimous vote – enacted it. That overwhelming support for the law strongly implies, she contended, that Congress certainly did not expect the law to apply to for-profit corporations, allowing them to seek religious exemptions from, for example, laws governing the minimum wage, child labor, or family leave.  And even if, as Clement assured the Court, courts have not previously seen such claims by for-profit corporations, Kagan predicted that a ruling in Hobby Lobby’s favor would cause religious objectors to “come out of the woodwork.”

After spending a few minutes on questions from Sotomayor about how the mechanics by which a corporation exercises religion, the Justices then plunged into the nitty-gritty of Hobby Lobby’s options under the ACA and the mandate, focusing in particular on whether the company faced a “substantial burden” for exercising its religious beliefs.  Kagan and Sotomayor suggested that the company could choose not to provide insurance for its employees at all, which would subject it to a penalty of $2,000 per employee – which, Kagan speculated, is probably less than it would have to pay to provide insurance for an employee.   And if that’s the case, Kagan continued, where is the substantial burden?   This theory seemed to pique the interest of Justice Anthony Kennedy, who is often regarded as a key vote in high-profile cases.  Assuming hypothetically that the costs to the company are the same whether it provides its employees with health insurance or instead pays the penalty and compensates the employees so that they can buy their own insurance, Kennedy asked Clement, what would your case be?  Clement countered that Hobby Lobby would still face a burden because, if it didn’t provide its employees with insurance, it wouldn’t be able to attract workers. 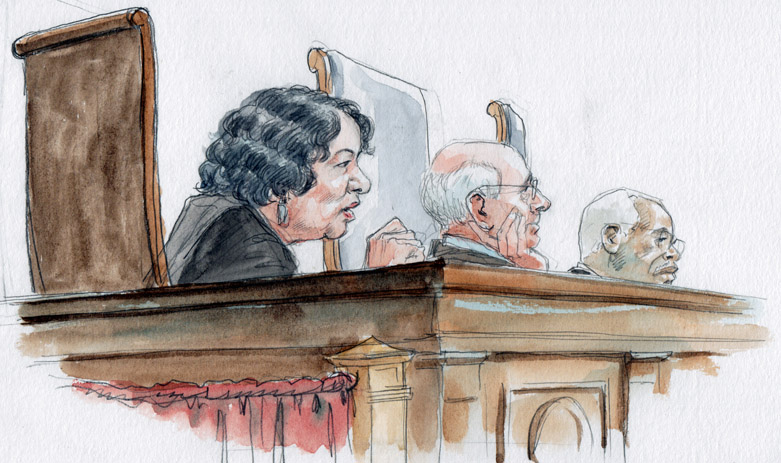 If Paul Clement faced tough and persistent questions from Justices Kagan, Sotomayor, and Ginsburg, Solicitor General Don Verrilli found Chief Justice John Roberts and Justices Alito and Scalia to be difficult sells during his forty-five minutes at the lectern.  Verrilli emphasized several points.  The first was that, in determining whether an exemption is available under RFRA, courts must consider the effect that the exemption will have on others – here, Hobby Lobby’s female employees, for whom contraceptive coverage will not be available.  Significantly, that argument seemed to carry at least some weight with Justice Anthony Kennedy, who earlier in the argument had expressed concern that an employer’s religious beliefs could trump the rights of female employees.  But other Justices were skeptical, asking Verrilli to identify language in RFRA that would even allow courts to consider the interests of the female employees.

Verrilli also urged the Court to focus, in deciding whether Hobby Lobby is even entitled to bring a lawsuit under RFRA, on whether the company is a “person” that can “exercise religion.”  And it would be, he argued, a “vast expansion” of the law for the Court to hold that for-profit corporations can make claims for religious exemptions from generally applicable laws.  But the Chief Justice suggested that the Court’s holding might not necessarily be that broad:  the Court could limit its decision in this case to whether corporations like Hobby Lobby, Mardel, and Conestoga, which are owned entirely by one family, have to comply with the mandate, without deciding whether a larger, publicly owned company can object to a law or regulation on religious grounds.

Several Justices also expressed doubt about whether, even if a corporation can exercise religion for purposes of RFRA, the government has a compelling interest in requiring corporations like Hobby Lobby to provide insurance that includes access to free birth control or the mandate is the narrowest possible way to do so.  On the first point, the Justices emphasized that the government has, for a variety of reasons, declined to require other employers – including churches and religious non-profits but also for-profit companies whose health insurance plans are grandfathered in – to comply with the mandate, thereby undermining the government’s argument regarding the mandate’s importance.  And on the second, Justice Antonin Scalia suggested that it wouldn’t be “terribly expensive” for the government, rather than the employers, to pay for the four forms of birth control at issue in this case.

Justice Stephen Breyer, who is often regarded as the fourth member of the Court’s more liberal wing, asked relatively few questions today, and the questions that he did ask for the most part did not tip his hand.  But, although the government will almost certainly need Breyer’s vote to prevail, that won’t be enough; it will need a fifth Justice, presumably Justice Kennedy.  Although Kennedy’s other comments and questions had suggested that his vote might be in play, any optimism that the government may have harbored probably faded when, toward the end of Verrilli’s argument, Kennedy told Verrilli that, under the government’s view of the case, a for-profit corporation like Hobby Lobby could also be required to pay for insurance that would cover abortions.

Will Justice Kennedy – as it appeared today – provide the key vote, or will we get a June surprise the way we did two years ago, in the Court’s ruling on the individual mandate?  We likely won’t know anything more until June, but whenever we do, we will be back to cover the ruling in Plain English.