The Supreme Court, in a one-hour, twenty-eight-minute session Tuesday, staged something like a two-act play on a revolving stage: first the liberals had their chance and Justice Anthony M. Kennedy gave them some help, and then the scene shifted entirely, and the conservatives had their chance — and, again, Kennedy provided them with some support.

So went the argument in the combined cases of Sebelius v. Hobby Lobby Stores and Conestoga Wood Specialties v. Sebelius.  The “contraceptive mandate” in the new federal health care law, challenged under federal law and the Constitution, fared well in the first scene, and badly in the second.

But the ultimate outcome, it seemed, will depend upon how Justice Kennedy makes up his mind.  There was very little doubt where the other eight Justices would wind up:  split four to four. 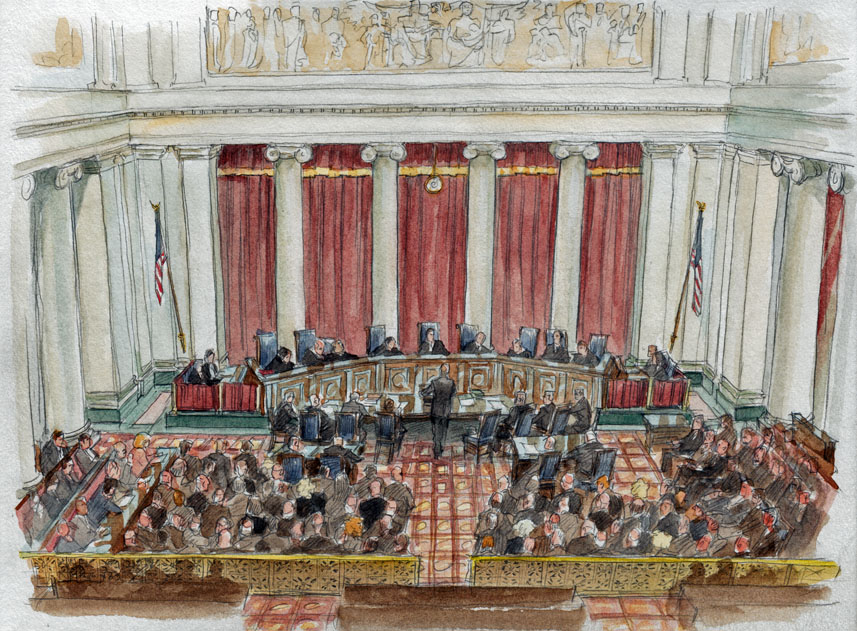 The hearing could not have been a pleasant experience for two experienced advocates — Washington attorney and former U.S. Solicitor General Paul D. Clement, and current Solicitor General Donald B. Verrilli, Jr., making a return engagement from their encounter two years ago when the Affordable Care Act first came up for review in the Court — when each won something.

In the end, what made trouble for each of them Tuesday was the slippery slope: if we ruled for you, what would that mean for other factual scenarios or other laws that might impinge on religious beliefs?

Clement was badgered throughout his time at the lectern, especially by Justices Elena Kagan and Sonia Sotomayor, who suggested that if corporations gain an exemption from having to provide birth-control services for their female employees, then the next complaint would be about vaccinations, blood transfusions, and a whole host of other medical and non-medical services that a company or its owners might find religiously objectionable. 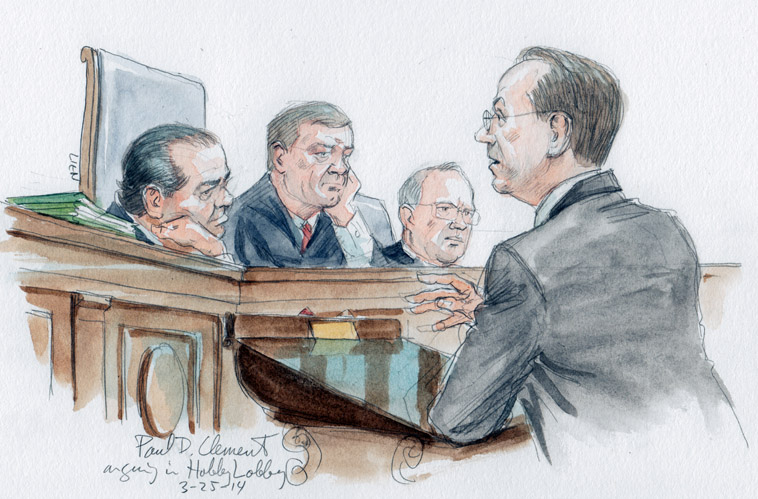 Early in the argument, Justice Kennedy asked non-committally how the Court could avoid the constitutional issue of the mandate’s impact on the right to freely exercise religion.  Clement said it would be easy, and relying only on a federal law, the Religious Freedom Restoration Act, would clearly favor a corporate exemption to the mandate.

When Kagan and then Sotomayor said corporations could accommodate their female workers’ access to contraception at little financial cost, either by paying a penalty for not providing the service in the health plan or by giving up such a plan altogether, Kennedy chimed in to suggest that, financially, at least, it would be “a wash.”

When those two explored whether the government was letting too many businesses escape the mandate by “grandfathering” their health plans, Kennedy interrupted to say that the conversation was focusing only on the mandate from the perspective of the employers.  What about the workers, who may not agree with their employers’ religious beliefs, Kennedy asked skeptically:  “Does religion just trump that?”

When it was Solicitor General Verrilli’s turn at the lectern, he found immediately that Chief Justice John G. Roberts, Jr., and Justices Antonin Scalia and Samuel A. Alito, Jr., were ready to pounce, disputing each of the government lawyer’s core points about the need for the contraceptive mandate in this context. 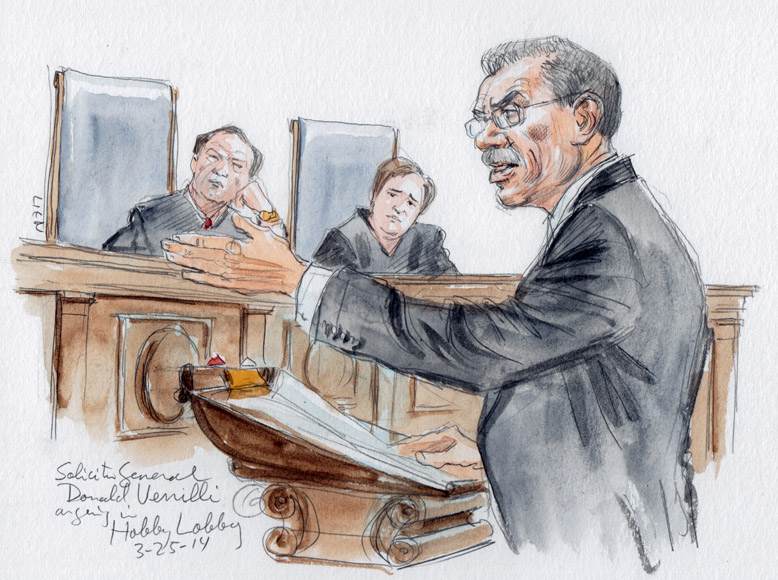 When Verrilli began putting heavy emphasis on his point that the Court, in weighing religious claims, must take full account of the negative impact that has on “third parties” who would be affected, Justice Scalia told him that the RFRA law makes no mention of third-party interests.

When Verrilli said the Court has never found a right to exercise religion for corporations, Alito wondered if there was something wrong with the corporate form that it would not be accorded religion freedom rights.  Did Verrilli agree, Alito said, with a lower court’s view that the only reason for a corporation to exist was to “maximize profits?”  Verrilli said no, but Alito had made his point.

As Verrilli’s situation worsened, Justice Kennedy moved in to wonder why it was that Congress would allow a government agency — the Health and Human Services Department — “the power to decide a First Amendment issue of this consequence….  That is for Congress, not for an agency.”  Kennedy would repeat that criticism later in the argument.

Although the Solicitor General had to contend mostly with questions and comments by the conservative members of the Court, he also had some difficulty when one of the Court’s moderate liberals — Justice Stephen G. Breyer — finally moved into the argument to ask why the government couldn’t just pay for the services it wanted female workers to have.

Verrilli tried to answer by saying that, if the government did try a different way to assure such services for corporate employees, the religious owners of some companies would just challenge that, too.  That did not satisfy Breyer, who wanted to know “how this case fits into the broader spectrum” of how courts and government accommodate religion.

Breyer did not seem to be lining up with the corporations, but instead looking for assurances that a ruling against them in this case might have broader implications that worried him.

Wisely, and predictably, Clement would start his rebuttal with Kennedy’s comment about corporations being forced to pay for abortions.  He obviously wanted that thought to linger as the Justices left the bench.