Argument analysis: To decide, or not

The more questions the Supreme Court Justices asked on Tuesday about the facts in a high-speed police chase case, the more they showed a willingness — maybe even an eagerness — to rule for the police.   But the more they looked for a legal principle, the more they were talking themselves out of ruling at all.  Those odd cross-currents marked the argument in the case of Plumhoff v. Rickard. 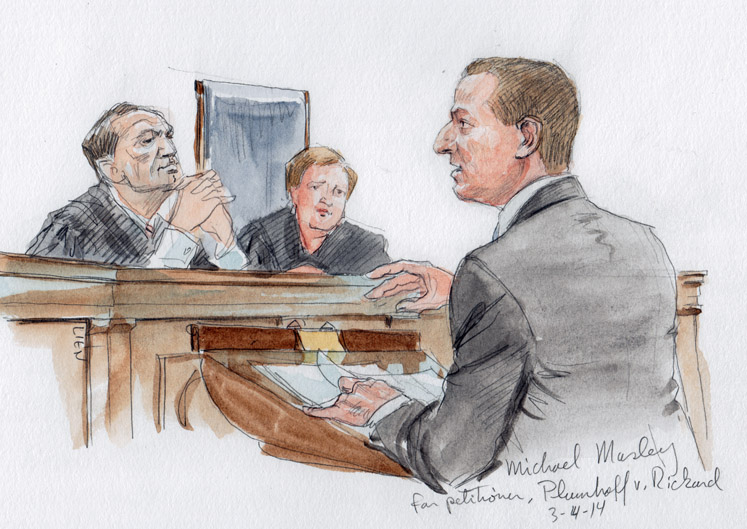 There were side questions about whether it made any difference that, in firing fifteen shots at the suspect’s car, the officers killed not only the driver but also a passenger, about whether the volley of shooting might not have been necessary to actually stop the suspect and end the chase, and even about whether the case had been properly appealed.   But those did not detract from the general sense that, in the Court’s eyes, the police might well have been justified in this particular use of deadly force.

Still, the case as it reached the Court was not just about the facts as shown on the videos and in lower-court testimony. It is also about what the state of Fourth Amendment law was at the time of this incident, which began in Arkansas before crossing over the state line into Tennessee.   But the federal appeals court that had rejected the officers’ claim for legal immunity had not drawn any conclusions about what the law was back in July 2004.

So, the Justices, in the end, just might conclude that the appeals court should be the first to weigh that question, rather than deciding it themselves.  And if that is the outcome, the Justices would not wind up with a judgment on the constitutionality of what the six police officers had done.

The questions from the bench were mild and somewhat meandering while two lawyers made their pleas — Michael A. Mosley of North Little Rock, Arkansas, the lawyer for the six officers, and Assistant to the Solicitor John F. Bash, a supporting lawyer from the Justice Department.

But when Gary K. Smith, the Memphis lawyer representing the daughter of the driver killed at the end of the chase, went to the lectern, the Justices’ fascination with the story they had seen unfold on the videotapes produced a quick rise in the intensity of the hearing, and the result was a very difficult time for Smith. 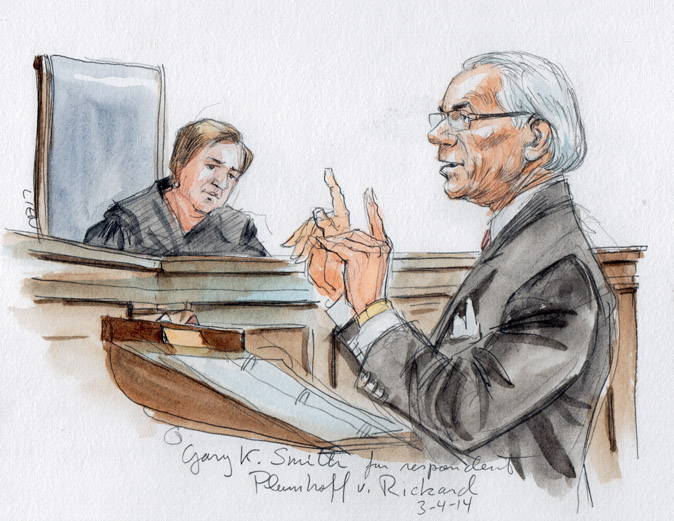 Early on, Justice Samuel A. Alito, Jr., recounted what the videos had shown had happened after the chase wound up on the busy streets of Memphis.  The Justice asked: “What was a reasonable police officer to do at that point?”  Smith tried to answer with a complaint about one of the officers shooting without hesitation when he wasn’t even threatened.

But Justice Antonin Scalia then took control of the argument, and repeatedly pressed Smith with arguments heavy with sarcasm and accusation about the driver’s actions.  When Scalia allowed himself to move away from his own interpretation of the facts, the Justice demanded to know what rule of law Smith was claiming had been established in 2004 about police handling of an emergency situation like this one.

Quoting from a statement in Smith’s brief, which Smith would retort was taken out of context, Scalia said that Smith had conceded that reasonable people could disagree about what kind of police conduct was reasonable.  If that was so, Scalia then said, that was enough to rule for the police, because it meant there was no “clearly established” Fourth Amendment principle in place to forbid what the police did here in 2004.

When Smith tried to argue that the officers in this incident could have chosen alternative techniques to end the chase, such as shooting the tires of the suspect’s car, Scalia and other Justices pounced on that, saying that was not a recital of any Fourth Amendment rule, so it was no help to Smith’s argument that the police should have known not to shoot to stop the chase.

Chief Justice John G. Roberts, Jr., ultimately wondered whether Smith was arguing that there was — then or now — a “clearly established” Fourth Amendment principle “that police cannot shoot to kill when a car is moving.”  That happens all the time in the movies, Roberts said, but “you say it was established law.”  Smith said that the Supreme Court itself had once said that shooting by police to stop a suspect in flight was different from police tactics short of using their guns.

Scalia disputed that response, reminding Smith that “you have to make the case that it’s clearly established law” that police could not use their guns to end a high-speed chase, and Smith had not done that.  Scalia repeatedly demanded that Smith indicate what established law governed this incident, but he got no response that satisfied him.

Smith, though, had not made that case when this lawsuit was before the U.S. Court of Appeals for the Sixth Circuit, because that court had made no effort to decide what the Fourth Amendment meant about police chases in 2004.   If the Supreme Court does not choose to follow its inclinations to find in favor of the police on the facts, then it has the option of ordering the Sixth Circuit to decide whether, in 2004, there was any constitutional principle that these six officers had violated and that they should have known about.