If Justice Anthony M. Kennedy was serious that history might not be enough to justify prayers to open government meetings, the Supreme Court will have to set off on a deeply challenging search for a different way to judge such religious utterances.  But if Justice Elena Kagan is right that, whatever the Court might do, it could make the cultural problem worse, then history may in the end turn out to be the only test to apply. 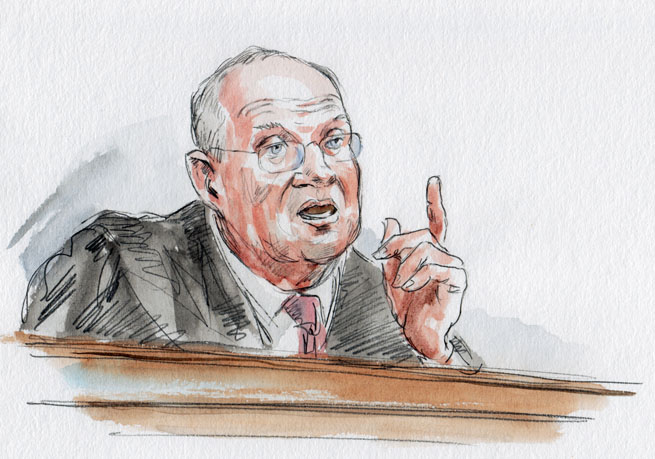 In other words, the fate of a thirty-year-old precedent, Marsh v. Chambers, was very much at issue in the one-hour hearing Wednesday on Town of Greece v. Galloway (docket 12-696), but its reaffirmation could be the only way to get together a majority after the Justices in coming weeks weigh a dizzying array of alternatives.  If there are any alternatives that were not explored Tuesday, they probably would be too strange for anyone to take seriously.

This case brought the latest jousting among the Justices over the constitutional puzzle that originated in America before the Founding:  how much separation should there be between government and religion?  This time, the puzzle envelops a practice by a New York community’s town governing board of inviting chaplains-for-a-day to say prayers (or something equivalent) to start the monthly meetings.

Marsh v. Chambers is at the center of that puzzle, because it upheld prayers before meetings of a state legislature, and it did so just because the Court said it could trace the practice back to the very first Congress.  But lower courts have found reason to wonder whether Marsh should still be followed, and that is actually what the Court seemed to be pondering Wednesday with three lawyers — one for the suburban town of Greece, N.Y., one for the federal government, and one for two townspeople who protested the prayer ritual.

The town’s lawyer, Washington attorney Thomas G. Hungar, opened by complaining that a federal appeals court had stretched the Marsh precedent out of shape.  Hungar’s legal briefs had made clear that the town’s legal strategy is really dependent upon Marsh’s continuing force. 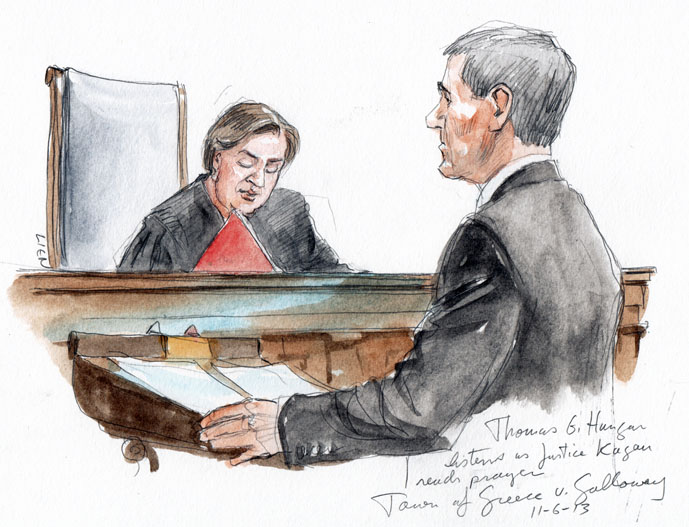 He had uttered only a few words before Justice Elena Kagan — in a question that actually would represent the hypothetical kind that would dominate the whole session — wondered about the constitutionality if the Supreme Court were to have opened this session with a practice very much like that routinely carried out by the Greece Town Board, complete with direct summonses to a Christian God and to Jesus Christ.

Hungar’s answer was that he didn’t think that would be permissible.  A moment later, Justice Kennedy somewhat impatiently asked why Hungar had conceded the point so quickly.  Why would it violate the Constitution, Kennedy asked.  The lawyer said there was no comparable history for such a ritual at the Court.

Is the practice at issue in Marsh “just a historical aberration?” Kennedy asked in a quick follow-up.  “What’s the source of the distinction?”  Chief Justice John G. Roberts, Jr., soon asked how far the historical argument would extend, and how the Court would know when to use that as the test.  Other Justices then added new queries about using historical analysis.

And, just a few minutes later, Kennedy suggested that he was not impressed with an argument that “we’ve always done it,” that the argument about government prayer “begins and ends” with whether it was validated by history alone.

By that point, it was strongly tempting to conclude that the Marsh approach was not going to be the judge of the Greece citizen prayers.  But, if not, to what would the Court then turn?  As the Justices quickly discovered, from their own questions from then on, just asking for an alternative is far different from defining one.

With Justice Stephen G. Breyer trying to lead the Court toward some rational list of what can or cannot be done with government praying, it seemed that every one of the Justices taking part in the exchanges had some variant they wanted to try out.

The Court has sometimes judged church-government issues by whether a policy or practice amounted to an endorsement of religion, and has sometimes used the test of whether government was trying to “coerce” someone into embracing a government-approved faith.  And the Justices considered both of those tests, in varying formulations, but it was not evident that a consensus was looming.

Sometimes, the questioning edged close to the absurd.  When a federal government lawyer, Deputy Solicitor General Ian H. Gershengorn, was defending the Justice Department view that clergy giving government meeting prayers should be told not to “advance” religion, Kennedy asked if that meant that the chaplain should be asked: “Are you going to advance religion today? And he says ‘Oh NO!'”

Kennedy, and some of his colleagues, made it seem even harder to fashion an alternative by voicing deep concern about having judges or other government officials in the business of censoring the content of prayers at government meetings.

When one of the nation’s leading experts on the law and history of religion, University of Virginia law professor Douglas Laycock, went to the lectern to challenge the Town Board’s prayer practice, he seemed to get immediately into trouble with his core argument that the people who show up at board meetings because they have business with the town officials would be “coerced” into going along with prayers even over their personal objection, so as not to offend the officials from whom they were seeking action. 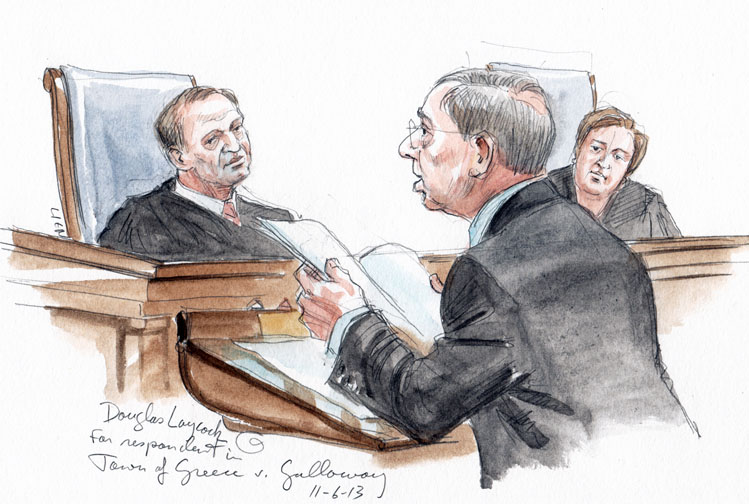 Justice Samuel A. Alito, Jr., interpreted Laycock’s argument — in an exaggeration — as an argument against any prayers at all in the local government setting.  When the professor said he was only seeking to ensure that any such prayers not be “sectarian,” Alito challenged him to recite a prayer that would be acceptable to people of all faiths.

Laycock suggested that a prayer might legally include an appeal to “the Almighty” or “the Creator,” but that only prompted Justice Antonin Scalia to suggest that those phrases would offend “devil worshipers” or atheists.  Laycock soon suggested that it might not be possible to frame a prayer that would satisfy both the Constitution and atheists, but that, too, disturbed some of the Justices as hardly a way to avoid the constitutional dilemma of defining an acceptable utterance.

Justice Scalia finally suggested what he thought “is missing here,” and that was an appreciation that, when local government officials attend their business meetings, they do so as citizens, take their beliefs with them, and their religious practices, and that includes their habit of “invoking the Deity” just as they do at home before eating meals.

As the hearing moved on, Justice Breyer continued to try to list approaches that he thought the Court might want to consider, on how to judge the validity of prayer.  He suggested that the Court might want to go back to first constitutional principles, and remember that “the major purpose” of the First Amendment’s religion clauses was to help people “live harmoniously together.”   But the items on his list came out sounding mutually contradictory, and Laycock showed little interest in any of them.

It was up to Justice Alito to try to pronounce something of a benediction on these exchanges.  “I don’t think it’s possible,” he said, “to compose anything that you could call a prayer that will be acceptable to all of these groups.”  To that, Laycock responded: “You can’t treat everyone equally without getting rid of prayer altogether.”

Near the end, Justice Kagan tried to sum up: Isn’t the question here, she said, whether public meeting prayers with references to Jesus Christ “will be allowed in a public town session like this one?”  When Laycock agreed that that was the issue, Kagan said it was a hard one, “because the Court lays down these rules and everybody thinks that the Court is being hostile to religion and people get unhappy and angry and agitated in various kinds of ways….And every time the Court gets involved in things like this, it seems to make the problem worse rather than better.”

In the coming weeks of deliberation in private, the Justices’ challenge may well begin and end with how to keep from making the problem worse.  And, at that point, leaving Marsh v. Chambers intact, allowing local governments to have prayers just as state legislatures and Congress can, might be the least cause of public agitation.