If the Supreme Court really does not understand how money moves around in American politics, how can it fashion constitutional rules to prevent abuses?  That seemed to be the most penetrating question that hung over the one-hour hearing Tuesday on the latest dispute over campaign finance.  The answer seemed to be that the Court is not really sure about the former, but it still is going to try to do the latter.

The overwhelming focus of the argument in McCutcheon v. Federal Election Commission (docket 12-536) was not about keeping or changing existing constitutional rules, but about the nuts and bolts of who raises campaign money, how it is spread around, and who feels indebted to donors as a result.

The Justices inclined to vote for limits on campaign donations seemed to believe that the current system is corrupting in favor of the rich, but that they still would like some harder information on just how that happens.  And the Justices who usually vote for a freer flow of money into federal campaigns seemed to think there are enough safeguards against corruption already and that any more will stifle political expression, of the not so rich, too.  But anything like a consensus that could attract five votes eluded both sides. 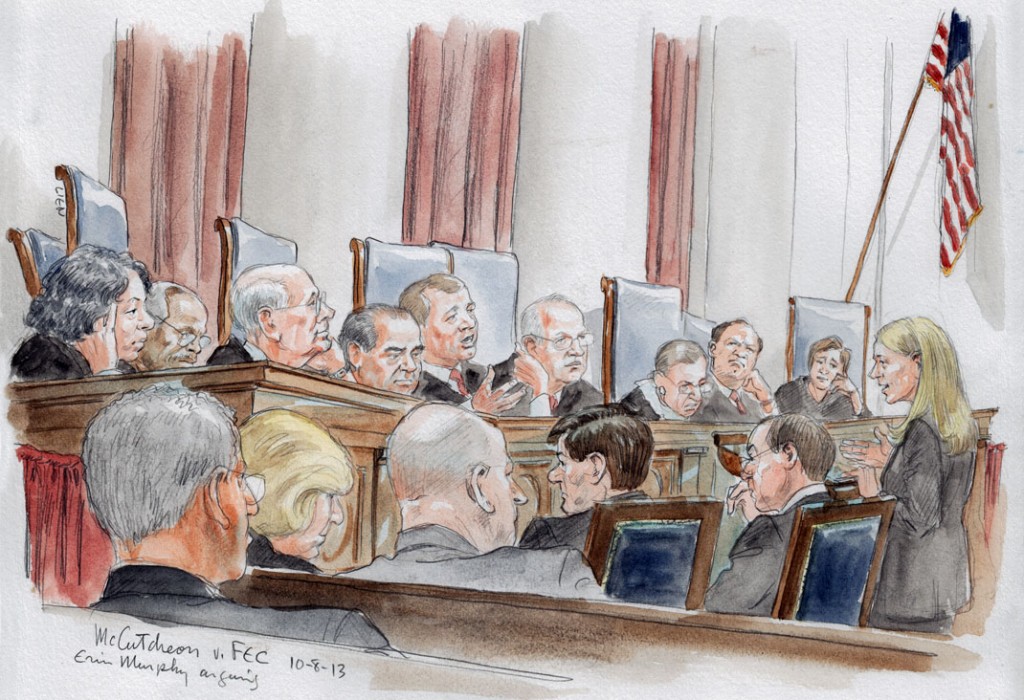 The McCutcheon case, of course, reached the Court with the clear potential to bring about a new constitutional order in campaign finance, in which the very rich might gain even more influence.  But what unfolded in the oral argument was an attempt — not notably successful — to penetrate the exquisite mysteries of turning dollars into election outcomes.  While some Justices complained that the case had reached the Court without the facts being fleshed out, it seemed doubtful that a majority would want to send the case back to a lower court to develop an actual record.

Justice Antonin Scalia bluntly argued that the Court did not need facts, that it could simply apply law.  But, he, like other Justices, clearly relied upon assumptions about how campaign finance works in the real political world, and he, like his colleagues, floated hypotheticals designed to test those assumptions.  Anything approaching a grand constitutional project did not get mentioned — except in a brief, cryptic manner by Justice Anthony M. Kennedy.

Justice Elena Kagan, for example, suggested an elaborate scheme of financial manipulation in which the leaders of a political party in the House of Representatives could put pressure on donors to put money into a big pot to help out threatened candidates of that party.  And Justice Samuel A. Alito, Jr., suggested that actual campaign finance does not really work that way, that money-seeking candidates don’t really collaborate for mutual advantage.

One could come away from this exploration with a feeling that the current two-year limit on the total amount of money that any one political donor can give to candidates for the presidency and Congress was in some trouble — not because it restricted what the super-rich can do, but because it might stifle the participation of a more modest donor who might want to send money to a number of candidates but could not do so without running up against ceilings.

Chief Justice John G. Roberts, Jr., who may well hold a decisive vote in this case, wondered aloud whether there was any way to deal with the problem of rich people writing very large checks that would not also inhibit wider participation in the money side of politics.

It was far from clear that the Court was getting much help from any of the three lawyers who went to the lectern. 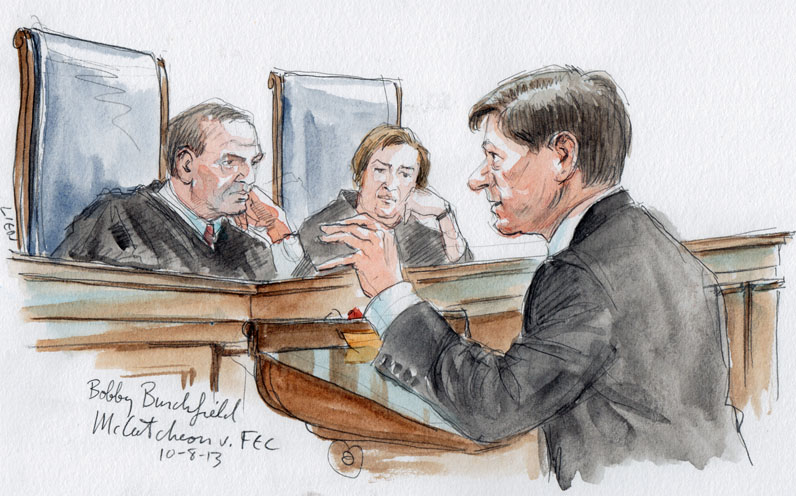 Erin E. Murphy, a Washington lawyer for a big-money Republican donor from Alabama and for the Republican National Committee, tried energetically to show that there are no real risks of corruption in the federal system now, that Congress has done enough to end abuse.  Bobby R. Burchfield, a Washington lawyer speaking for the Republican leader of the U.S. Senate, made a fleeting plea for the Court to impose the strictest constitutional test on contribution limits.  And U.S. Solicitor General Donald B. Verrilli, Jr., made an impassioned plea for campaign ceilings on the premise that, otherwise, federal politics would flirt with total domination by fewer than five hundred wealthy donors. 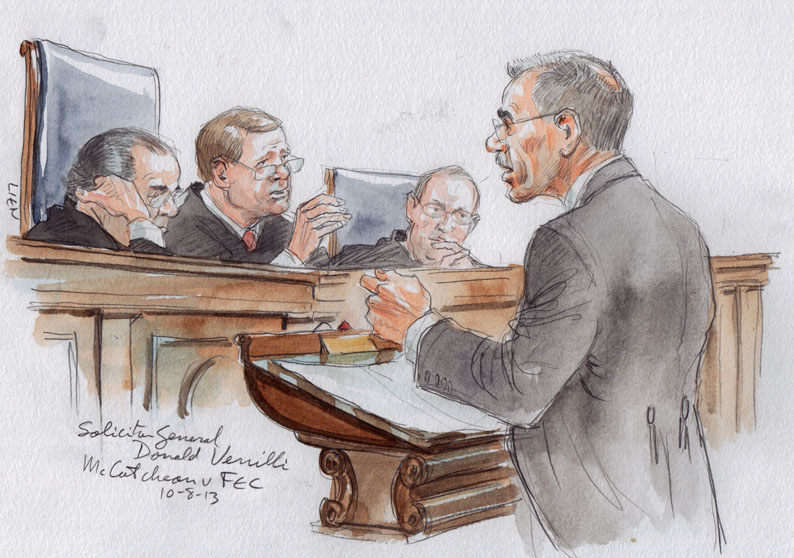 But for every legal thrust by a lawyer, the Justices countered with questions about how political influence is actually purchased, and whether this was a problem at all and, if so, what was the nature of that problem and what might be done to fix it.  At times, it sounded as if it were a debate that one might hear in Congress on potential new campaign finance legislation, rather than a courtroom debate over the limits of the First Amendment as applied to campaign contributions.

Will the Court start all over with the issue of limiting campaign contributions, as it did four years ago with independent campaign spending, opening the money floodgates further?  Maybe, but there was almost nothing heard in Court on Tuesday that would suggest any such boldness.