Treating the solution of unsolved crimes as a legitimate part of routine police station “booking” procedures, a divided Supreme Court on Monday upheld the power of government at all levels to take DNA samples from every person legally arrested for a “serious” new crime.  What a suspect may have done in the past, the Court majority ruled, is a part of the profile that police may constitutionally begin to assemble at the time of arrest for a separate offense.

Justice Anthony M. Kennedy, writing for a five-four majority, insisted that the ruling in the case of Maryland v. King (docket 12-207) involved little more than what happens when police take a suspect’s fingerprints or mug shot.  But Justice Antonin Scalia, writing for the dissenters, said the Court had validated the use of scientific evidence taken without a warrant not to make an identification but to gather evidence to solve cold cases — something he said the Court has never allowed before. 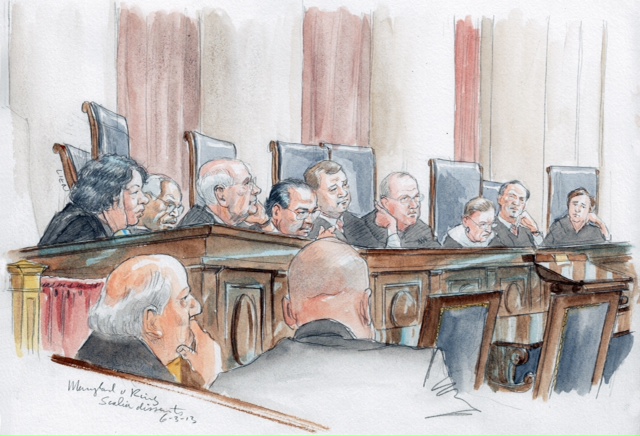 The Kennedy and Scalia opinions were almost totally at odds with each other, in tone and in substance.   The majority, although writing at considerable length, sought to make it appear that the outcome was easily reached and involved no real alteration of existing constitutional norms.  It also made no effort to respond to the dissenting opinion.

The dissenters argued that the Court was casting aside a long-standing rule that police may not take scientific samples involuntarily from an individual, if their only purpose is to solve a prior crime.

It has been quite commonly accepted that the Constitution does allow the police to take a DNA sample from everyone who has been actually convicted of a crime, but the Court until this new ruling had never extended that permission to a person taken into custody by police on suspicion of a new, unrelated crime.

While the Kennedy opinion said this extension was being allowed only when the person had been arrested for a “serious” new crime (it did not define that category), the Scalia opinion argued that the ruling would not be kept within that limit, and would allow DNA sampling for anyone arrested of even the most minor crime.

The only guide as to what kind of accusations of a new crime would justify taking involuntarily a DNA sample from the arrested individual was the actual language of the Maryland law at issue in the case.  That law specified that the sampling had to be restricted to those who are arrested for “a crime of violence or an attempt to commit a crime of violence, or burglary or an attempt to commit burglary.”  Violent crimes, under the law, include murder, rape, first-degree assault, kidnapping, arson, and sexual assault.

The individual involved in the case, Alonzo Jay King, Jr., of Wicomico County, Maryland, was arrested in 2009 on a charge of assault.  Police took a DNA sample by swabbing his inner cheek with a cotton tip and, ultimately, that sample linked him to a previously unsolved rape case that had occurred six years before.   His DNA was found to match that on semen taken from the victim of the rape.  There was no other evidence linking King to that crime.  He was tried, convicted, and sentenced to life in prison without parole.

That is the ruling that the Supreme Court overturned on Monday, declaring that the state’s interest in learning King’s full identity, including the chance that he had committed crimes in the past, and its interest in solving old cases, was more than sufficient to offset what the majority found to be a minimal intrusion into King’s personal privacy.   Justice Kennedy stressed that Maryland’s DNA sampling law had several key restrictions in it, including that the samples were to be used only to help identify an individual taken into custody, and not to probe into the medical privacy of the individual by learning what his body chemistry showed.

In an opinion that dwelled at much greater length on the balance on the side of the government than on the side of suspects such as King, the majority put heavy emphasis on the need of police to use “a safe and secure way to process and identify the persons and possessions they must take into custody.”

Kennedy wrote in that regard: “A suspect’s criminal history is a critical part of his identity that officers should know when processing him for detention.”   When officers take a DNA sample, they essentially are only seeking to find a link into the criminal records they already have on file, the opinion said.  “The task of identification necessarily entails searching public and police records based on the identifying information provided by the arrestee to see what is already known about him,” the majority said, adding: “It uses a different form of identification than a name or fingerprint, but its function is the same.”

Turning to King’s privacy claims, the majority said that “once an individual has been arrested on probable cause for a dangerous offense that may require detention before trial, his or her expectations of privacy and freedom from police scrutiny are reduced.”  Moreover, the opinion said, merely touching the interior of a suspect’s mouth with a cotton swab involves no pain and no significant invasion of privacy.

The dissenting opinion, seeking to take apart every major aspect of the Kennedy opinion, argued that the DNA sampling procedure was really not designed as part of an identification of an arrested individual, but actually served to achieve only one end: turning up evidence of suspects to solve a prior crime having nothing to do with the offense for which the individual was arrested.

The process of analyzing DNA takes so long, Justice Scalia wrote, that it really has no value in helping police fully identify a suspect that they have in custody for another crime.

The dissent likened the procedure to a “general warrant,” in which police are allowed to search a suspect even if they have absolutely no evidence to justify suspicion of that person.   While the Court has in the past allowed some police searches even if they have no suspicion that the individual involved has committed a crime, the Court has never done so when the police were seeking to gather evidence of crime, the dissenters said.  For example, they noted, the Court has allowed urine samples of railroad workers involved in accidents, or of public school students engaging in school activities — but explicitly not to gather evidence to prosecute them for crime.

While the new ruling will, indeed, help solve more crimes, Justice Scalia wrote, so would taking DNA samples of everyone who flies in an airplane, gets a driver’s license, or goes to a public school.   In closing, the opinion said: “I doubt that the proud men who wrote the charter of our liberties would have been so eager to open their mouths for royal inspection.”

The Supreme Court, in the case of Maryland v. King, was asked to clarify the power of police — under the Constitution’s Fourth Amendment limit on police searches — to take a DNA sample from a person accused of crime, but not yet convicted of that crime.  At issue was a Maryland law that required routine DNA sample of every person arrested by police for what that law defines as a “serious crime.”

The way the Maryland law works is that, if police have sufficient reason to believe that an individual has committed such a “serious” crime, that will justify taking that person to a police station to hold them there for further investigation of that crime, to see if charges are to be filed and prosecuted.  Once such a person is going through the police station “booking” procedure, according to that law, police must take a DNA sample.

Such samples are collected, and matched against a national database.  It is possible that a match will turn up, linking that arrested individual to a crime, even though police had no specific suspicion that the individual was involved.   The match can be used as evidence to place the arrested individual at the scene of that earlier crime.

Maryland’s highest state court, the Maryland Court of Appeals, had ruled that taking the DNA sample without a court order and without the arrested individual’s consent is a violation of that person’s right of privacy under the Fourth Amendment.

The Supreme Court disagreed on Monday.  The Court found that the public policy value of having a policy of routine DNA sampling of arrested persons is so great, and DNA technology so efficient, that this far outweighs the minimal intrusion on privacy that is entailed when police take a DNA sample.