When the Supreme Court agreed in February 2012 to hear the University of Texas undergraduate admissions case, there was no question that the appeal set up a major test of affirmative action. But why, with that case still lingering on the docket as the only undecided case from the Court’s October sitting, would the Justices agree to hear a second affirmative action case, this one from Michigan, to be argued next fall?

The short answer is that the two cases are totally different. 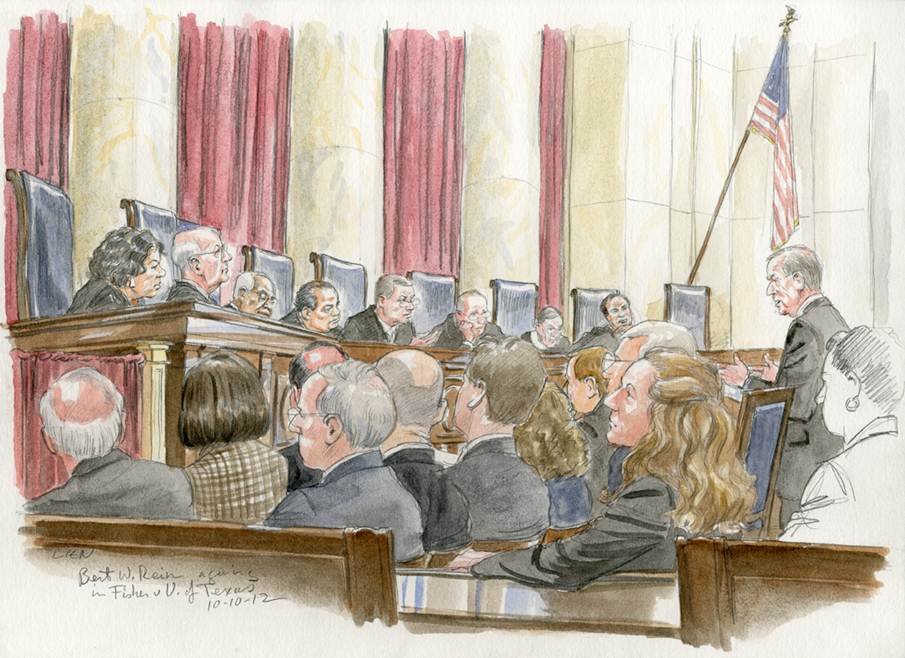 Just how they differ and what the Court may consider in each of the cases is worth exploring. The answer may be of interest to students of the Supreme Court and to those interested in civil rights law and affirmative action.

The Texas case, Fisher v. University of Texas, is at this point the better known of the two.  The case is a challenge to an affirmative action plan in which race is taken into account as a factor for admission to the University of Texas. Most of the undergraduate places in the entering class are filled through a plan which guarantees a spot to any student who graduates in the top ten percent of a Texas high school. But the remaining slots – about nineteen percent of the total spaces – are filled by a second program that considers race among other factors to promote diversity in the make-up of smaller classes and academic departments.

Abigail Fisher, who is Caucasian, applied for admission to the university.  But she was not in the top ten percent of her class, and she did not receive one of the remaining slots.  She then challenged her denial of admission, arguing that she was a victim of discrimination based on her race in violation of the Fourteenth Amendment’s Equal Protection Clause. Both the federal district court and U.S. Court of Appeals for the Fifth Circuit upheld the Texas plan.

In the Supreme Court, Fisher’s lawyer disclaimed any interest in having the Justices reverse their 2003 decision, Grutter v. Bollinger, upholding the limited use of affirmative action at the University of Michigan Law School. Instead, he asked the Court to strike down the university’s use of race to fill the remaining slots and to clarify that it goes beyond the very narrow circumstances in which race may be taken into account.

Ordinarily, if another affirmative action case came along while the Texas appeal was awaiting decision, the Justices would hold the second case until they decide the first. Then the Court would either grant the second case, vacate the ruling, and send it back to the lower court to apply the newly announced rule or, perhaps, grant the second case if there are additional issues to be addressed.

But the Court did neither of those things with Schuette v. Coalition to Defend Affirmative Action, involving affirmative action in Michigan.  Instead, it granted the petition for certiorari on March 25 without waiting to decide Fisher first.

The reason is that Schuette presents affirmative action issues in an entirely different context. The case involves a challenge to Proposal 2, an amendment to the Michigan Constitution, approved by voters in 2006, that banned affirmative action in the state. The statewide ban was challenged by a coalition of groups and individuals who support the continued use of affirmative action in Michigan. Other lawsuits were filed as well, but a federal district court largely upheld the ban enacted by the voters.

The appeal roiled the U.S. Court of Appeals for the Sixth Circuit, where a three-judge panel initially struck down the affirmative action ban by a two-to-one vote. Then the full Sixth Circuit agreed that Proposal 2 was unconstitutional, ruling eight to seven in an en banc decision that the voters had violated the Equal Protection Clause. The ruling by the full appeals court produced five separate dissenting opinions. The Supreme Court agreed to hear the appeal, and argument in the case will be held next fall.

The Sixth Circuit ruled in the Michigan case that because race-based affirmative action is still permitted by the Constitution, a decision by the voters of the state to prohibit this remedy distorts the political process and imposes a burden based on race that violates the Equal Protection Clause. The ruling turns not on the Court’s long line of affirmative action cases but rather on a shorter set of precedents holding that individuals may not have their ability to participate in and influence the political process made more difficult because of their race. The Sixth Circuit found that amending the state constitution made it unconstitutionally difficult to advocate for the lawful remedy of affirmative action.

That the Texas and Michigan cases are different is underscored in the legal arguments. The Sixth Circuit opinion does not cite the Fisher case at all. And the only reference to Fisher in the Supreme Court appeal of the Michigan case is in a footnote in the petition by Michigan Attorney General Bill Schuette which says, “This case presents the different issue whether a state has the right to accept this Court’s invitation in Grutter to bring an end to all race-based preferences.” The invitation is a reference to the suggestion by former Justice Sandra Day O’Connor in Grutter that affirmative action should have an end point, perhaps twenty-five years after the 2003 Grutter decision.

Yet saying that the two cases are different and do not rely on one another is a strangely unsatisfying answer. If the Supreme Court were to virtually abolish affirmative action in Fisher, for example, that might seem to obviate the need for a ruling in the Michigan case.

What lies ahead in this volatile field is uncertain, then. When the Court granted the Michigan petition in March, there was speculation that the Texas ruling must be imminent or that the Court would dismiss the Texas case for procedural reasons – specifically, that Abigail Fisher has now graduated from another university, although she still seeks damages.

One thing the two cases share in common is that Justice Elena Kagan is not participating in either one, leaving an eight-Justice Court to wrestle with the important issues. With only eight participants and a Court closely divided over issues of race, there are myriad possibilities for how these cases might come out. Stay tuned this spring for the Texas ruling, and probably a year from now for Michigan.

Posted in SCOTUS for law students