Court to rule on deadly drugs

The Supreme Court agreed on Monday to decide whether prosecutors must prove that the use of heroin directly caused someone to die, in order to get a longer prison sentence for the person convicted of selling the drug.   The case of Burrage v. United States (12-7515) will test whether the death-by-heroin crime exists if heroin only contributed to the death, but was not the cause.

That was the only new case granted by the Justices, as they turned aside a significant test case on a state’s power to make it a crime for others to help undocumented immigrants enter the state, hide them there, or help them move about the state.  That “anti-harboring” provision was the only part before the Court of a sweeping anti-immigrant law passed by Alabama two years ago.  The Justices made no comment as they rejected the case of Alabama v. United States (12-884).

The Court issued its orders and opinions without Justice Stephen G. Breyer on the bench; he remained in a hospital, recovering from surgery after breaking his shoulder in a bicycle accident on Saturday.  (UPDATE 4:40 pm: Justice Breyer has been released from the hospital.) 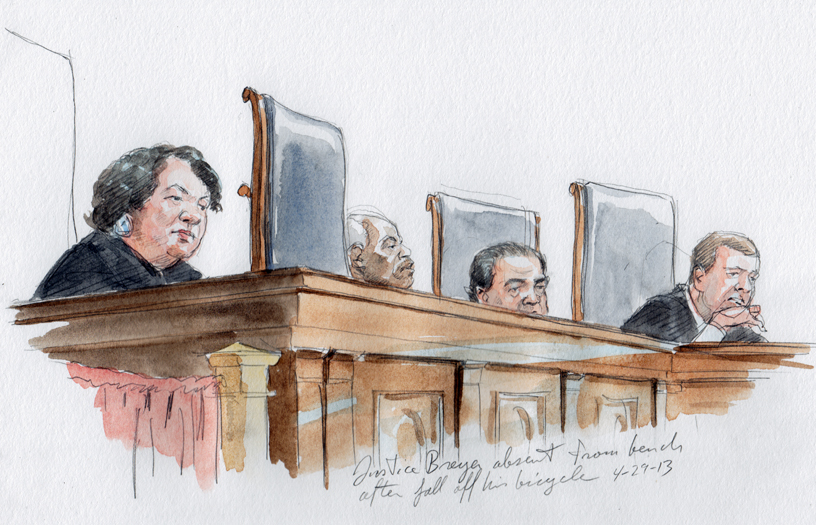 The heroin case, from Iowa, involved the federal law that makes it a crime to sell heroin, but then adds to the punishment if the person who uses the drug dies.  If convicted of selling heroin, an individual can be sentenced to a maximum of twenty years.  But, if the user dies “from the use of such substance,” then twenty years is the minimum, and life is the maximum.

A Nevada, Iowa, man was found dead by his wife in April three years ago, the morning after he had used a combination of drugs, including heroin.   He had bought the heroin the day before in a parking lot of a grocery store in nearby Ames, Iowa, from a man known as “Lil C,” the street name for Marcus Andrew Burrage.

At Burrage’s trial, two doctors who testified for the prosecution said that heroin was a contributing cause, but they could not say it had caused the man’s death.  Burrage’s lawyers asked the judge to instruct the jury that they could convict him of the death-by-heroin crime only if they proved that the death must have been the actual or “substantial” cause of death.  The judge refused, and instead told the jury it could find Burrage guilty of that crime if the heroin was “a contributing cause” of the death.

The jury convicted Burrage of one count of distributing heroin and a separate count of distributing heroin that resulted in death.  He was sentenced to twenty years on each count, with the sentences to be served together.   Burrage’s challenge failed in the Eighth Circuit Court, and his lawyers took the case on to the Supreme Court.  After the Justice Department declined to respond, the Court asked for a response.  The Department urged the Court to deny review.

In granting review, the Court accepted two issues (questions 1 and 2): first, whether the crime of distributing drugs causing death is a strict liability crime without a cause requirement, and, second, whether a person can be convicted of that crime under jury instructions which allow a conviction when the heroin contributed to death but was not the “proximate cause” of the death.

The case will be heard and decided in the Term starting next October.

The Alabama immigration control case the Justices chose to bypass Monday was a potential sequel to the Court’s ruling last Term striking down parts of an Arizona law that other states have since imitated.  Alabama’s legislature passed an even more sweeping law, called “H.B. 35,” but much of it has been blocked by the Eleventh Circuit Court.

Among the provisions that the Circuit Court said were likely to be struck down when the case went to full trial were the anti-harboring provisions.   The state asked the Supreme Court to review only that part of the law, arguing that such a review would allow the Court “to resolve one of the few issues that still divides the country’s governments about the extent to which Congress” has taken over the field of immigrant control.

The Court denied review, with Justice Antonin Scalia noting, without explaining his reasons, that he dissented.

The Justices also turned aside a plea to cast aside a legal doctrine that allows federal appeals courts to avoid ruling on a bankruptcy reorganization plan because it has already been finalized, even though a court could still provide some relief to the plan’s challengers.  The doctrine is called “equitable mootness,” and it applies only in the bankruptcy context.  It first emerged in a Ninth Circuit Court decision in 1981.

The doctrine had been sharply criticized by Justice Samuel A. Alito, Jr., in 1996, when he was a judge on the Third Circuit Court based in Philadelphia.  He did not take part in the order denying review Monday.,

Among cases the Court considered at its private Conference last Friday, but on which it took no action Monday, was a case testing the constitutionality of holding graduation ceremonies for a public high school in a church.   The case is Elmbrook School District  v. Doe (12-755).  The case has been up for consideration five times by the Justices, without action so far.  It has been rescheduled for the next Conference, on May 9, according to the Court’s electronic docket.