The lengthening series of D.C. Circuit Court rulings against the legal claims of Guantanamo Bay detainees drew its sharpest complaint yet in a new filing at the Supreme Court Wednesday.Â  What has emerged is open rhetorical warfare on the Circuit Court judge who has been the architect of many of its rulings in Guantanamo cases: Senior Judge A. Raymond Randolph.Â  He recently gave a public lecture, titled “The Guantanamo Mess,” which is linked in the new brief, suggesting that the judge “has all but announced a public agenda.”Â  The filing accuses Randolph of leading the Circuit Court in “passionate animosity to the Guantanamo cases,” perhaps motivated by the Supreme Court’s “repeated reversals” in several of those cases. 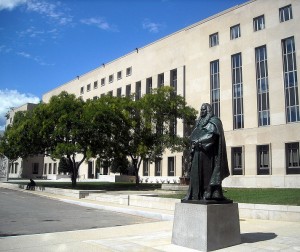 Lawyers for a Yemeni national told the Justices that the “D.C. Circuit appears intent on reversing the effect of this Court’s [2008] decision in Boumediene [v. Bush]…Unwilling to abide the commands of Boumediene, the court of appeals has thwarted the intent and rule of that decision at every turn.”Â  For detainees, the brief added, the Circuit Court has become a “road block.”

The brief was in reply toÂ  a Justice Department filing earlier this month in the pending case of Al-Adahi v. Obama (10-487), now scheduled to be considered by the Justices at their private Conference Jan. 14.Â  (This earlier post on the blog discusses that Department document.)Â  This is the first of eight new detainee appeals now on the Court’s docket to be ready for the Justices’ consideration.

In the Al-Adahi case, the Circuit Court — in an opinion written by Judge Randolph — established a new legal rule for Guantanamo cases, requiring the trial judges in the District Court to use a new mathematical standard — “conditional probability” — that gives enhanced weight to the government’s arguments in favor of continued detention of Guantanamo captives.Â  That standard, the new brief contended, will go well beyond Guantanamo cases, and will govern how the Circuit Court reviews “all civil non-jury cases.”Â  The standard, the filing argued, allows the Circuit Court to adopt for itself a wide-ranging authority to judge the strength of the evidence, substituting for the judgment of the District Court judges who tried the cases and heard witnesses in person.Â  In his case, Mohammed Al-Adahi appeared at the habeas trial via a video hookup to Guantanamo.

“The price of the circuit court’s determined assault on Boumediene is, in this case, a reconfiguration of the roles of trial and appellate courts,” the brief argued.Â  The Circuit Court decision in Al-Adahi’s case, it added, “is evidence that the [circuit] court will create new and dangerous theories to overturn the findings of trial judges,” it added.Â  “Presuming that this Court meant what it said in Boumediene, it should grant” review and reverse in this case, the brief said.Â  “Unless the lower courts follow this Court’s decisions, even if they disagree with its opinions and the constitutional provisions they enforce, the Court is reduced to writing law review articles.”

Pointedly, the brief recalled that Judge Randolph also wrote three prior Guantanamo decisions that the Supreme Court had overruled — Boumediene, as well as Rasul v. Bush in 2004 and Hamdan v. Rumsfeld in 2006.Â  The brief added: “As a senior judge, the author of Al-Adahi is added to randomly assigned two-judge panels and often hears Guantanamo cases.”Â  And, it noted, no Guantanamo detainee who has won a habeas case in District Court “has survived a trip” to the Circuit Court.Â Â  Even more than the present eight pending cases are coming, “seeking this Court’s attention,” the brief said.

The filing argued that the Justice Department had given, in its own brief, only a “dispirited” defense of the “conditional probability” standard, doing so mainly by recharacterizing the Circuit Court’s “wholesale change in the scope of review” as if it were “a principle of reasoning that is consistent with” Supreme Court precedent.Â  “The government,” it went on, “never explains how the court of appeals’ ‘new math’ can be squared with a system of justice in which testimony matters and trial courts judge its credibility — making all the qualitative judgments that affect that assessment.”

The “conditional probability” standard, the brief asserted, has “system-rocking import,” as a “wholesale rewriting of the scope of appellate review in civil cases in which the district court is the fact-finder.”

Judge Randolph’s opinion in Al-Adahi traces the “conditional probability” standard to a 1993 Circuit Court opinion that he wrote, U.S. v. Prandy-Binett.Â  (The opinion in that case can be read here.)Â  It involved a legal issue over how courts should weigh the judgment of narcotics officers in deciding whether a package contained illegal drugs — an issue of probable cause. “Al-Adahi is its first use in reviewing the decision of a district court finding facts at trial,” the new brief told the Justices.

With the filing of the reply brief by Al-Adahi’s lawyer, his case is now ready for distribution to the Justices for their initial look next month.

Posted in Detainee Litigation, Cases in the Pipeline