In oral argument on Monday in Abbott v. United States an 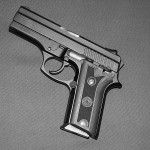 d Gould v. United States, the eight Justices (Justice Elena Kagan was recused) were presented with substantially different interpretations of Section 924(c)â€™s â€œexceptâ€ clause.Â  [You can read Brooks Hollandâ€™s preview of the case here.]Â  The petitioners in the case offered two interpretations, both fairly broad:Â  petitioner Carlos Gould argued that any minimum sentence applicable to a defendant at sentencing could trigger the clause, while petitioner Kevin Abbott contended that the clause applies whenever there is a greater minimum sentence for any offense from the same transaction as the Section 924(c) offense.Â  The government, by contrast, offered a much narrower construction of the clause, arguing that the clause â€œis triggered by an offense which has a greater mandatory minimum and which has the same elements as and is the same offense as a Section 924(c) offense.â€

Arguing on behalf of petitioner Carlos Gould, David Horan of Jones Dayâ€™s Dallas office emphasized that Congressâ€™s purpose in enacting the â€œexceptâ€ clause was to â€œensure that a defendant who is convicted under 924(c)(1)(A) receives some sufficient minimum punishment.â€Â  His interpretation of the â€œexceptâ€ clause, Horan contended, was most consistent with Congressâ€™s purpose and was also most consistent with the text of the clause.Â  The Court appeared less convinced than Horan that the text of the statute was clear, as evidenced by the fact that even the two petitioners did not share the same interpretation of the clause.Â  The Court also disputed Horanâ€™s suggestion that his interpretation â€“ unlike those advanced by Abbott and the government â€“ did not require the Court to read anything into the statute:Â  Justice Alito contended (in a sentiment later echoed by Justice Sotomayor) that something has to be implied to fill in the gap left by the phrase â€œexcept to the extent that a greater minimum sentence is otherwise providedâ€; the question, in those Justicesâ€™ view, is just what that something should be.

Arguing on behalf of petitioner Kevin Abbott, James Ryan of the University of Virginiaâ€™s law school emphasized that the governmentâ€™s construction of the statute would â€œleave[] one half of the except clause with absolutely no practical effect,â€ because it would apply only to one provision of law beyond Section 924(c):Â  18 U.S.C. Â§ 3559(c).Â  When Ryan sought to press his affirmative case â€“ that the â€œexceptâ€ clause is limited to sentences for the same transaction â€“ he drew questions regarding what would constitute a â€œtransactionâ€ for purposes of the clause.Â  Like Horan, Ryan also ran into resistance when he attempted to argue that the text of the statute is clear; at a minimum, he countered, the divergent interpretations demonstrate that the statute is so grievously ambiguous that the rule of lenity should apply.

Acting Deputy Solicitor General Roy McLeese argued on behalf of the federal government.Â  He was interrupted by Justice Sotomayor after just five words, but was soon able to make his affirmative case:Â  that the â€œexceptâ€ clause was intended to clarify a complex statute, and it â€œoperates internally to Section 924(c) to tell the district court judge . . . .:Â  You impose one mandatory minimum sentence for each 924(c) violation, whether aggravated or non-aggravated.â€Â  The Chief Justice, who had been silent throughout the petitionersâ€™ argument, was immediately skeptical:Â  in his view, because the statute was not particularly complicated, no â€œclarificationâ€ would have been necessary.Â  McLeese rejected any idea that the rule of lenity would come into play, countering that â€œthere is no grievous ambiguityâ€ in the statute.Â  Moreover, he emphasized, the interpretations advanced by Gould and Abbott would create anomalies that Congress could not have intended â€“ for example, a defendant who committed a serious crime could receive a lighter sentence than a defendant who committed a less serious crime.