UPDATE, Feb. 5:Â  The content of this post will be continually updated throughout the month of February to reflect the latest schedule.

We are very excited to announce the lineup of participants for our special February programming on Race and the Supreme Court, in recognition of Black History Month.

We extend sincere thanks to the law professors, litigators, historians, journalists, and other top professionals who have donated their time and resources to this project.Â  Our goal is to reflect on the lasting impact the Supreme Court has had on race, both in law and in American society.Â  In light of Black History Month, many of our contributors focus on the Court’s historical impact on the black community.Â  The topics reflect diverse and sometimes divergent views, opinions, attitudes, and assumptions. This diversity adds to the value of the project and reinforces the mission of SCOTUSblog to provide relevant, credible, and balanced Supreme Court coverage.Â  Drawing special attention during Black History Month to the legacy of legal issues pertaining to Race and the Supreme Court, we believe, will expand public knowledge and awareness of the Courtâ€™s centrality in shaping American history.

Below is a list and preliminary schedule (subject to change) of authors and topics to be posted over the next month. 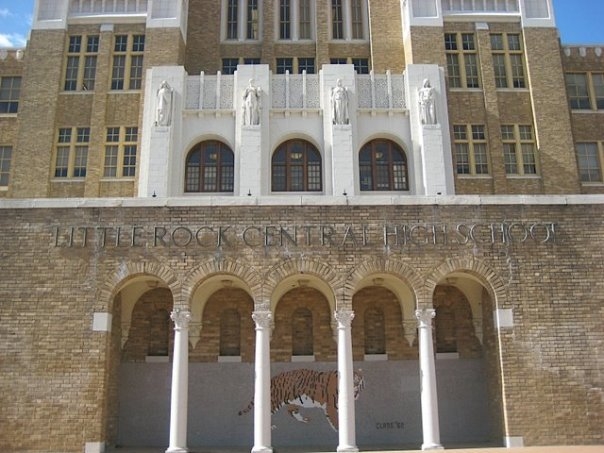 In 1957, three years after the Supreme Court’s decision in Brown v. Board of Education, Little Rock Central High was the site of the public forced integration of nine African American students (“The Little Rock Nine”).

â€œHas the Supreme Court Been Mainly a Friend or a Foe to African Americans?: The Supreme Courtâ€™s Impact on Black History for the Past Fifty Yearsâ€
â€“Michael Klarman, professor at Harvard Law School

â€œJones v. Alfred Mayer and the Uniqueness Of Raceâ€
â€“Michael Rosman, general counsel for the Center for Individual Rights

Podcast: â€œThe Unexpected Consequences of Brown v. Board of Education on African American Schools and Education in the Southâ€
â€“David Cecelski, historian and author of Along Freedom Road, Hyde County, North Carolina, and the Fate of Black Schools in the South

â€œThe Global Impact of Brown v. Board of Educationâ€
â€“Mary Dudziak, professor at the University of Southern California Gould School of Law and founder of the Legal History Blog

â€œWhat Can Brown Do For You?: The Courtâ€™s Struggle Over the Meaning of Equal Protectionâ€
â€“Pamela Karlan, professor at Stanford Law School

Podcast: Interview on Brown v. Board of Education and subsequent litigation over black civil rights
â€“Jack Greenberg, professor at Columbia Law School and former director-counsel of the NAACP Legal Defense and Education Fund

Post on â€œdisparate impact analysisâ€ and the Constitution
â€“Gail Heriot, former commissioner of the U.S. Commission on Civil Rights and present professor at the University of San Diego Law School

Podcast with David Stras, law professor at the University of Minnesota, on his experience clerking for Justice Clarence Thomas

â€œWhat Powell v. McCormack Teaches Us About Racial Politics in a Constitutional Democracyâ€
â€“Kareem Crayton, professor at the University of Southern California Gould School of Law

Topics for additional posts are being considered by:

Posted in Race and the Supreme Court

Race and the Supreme Court